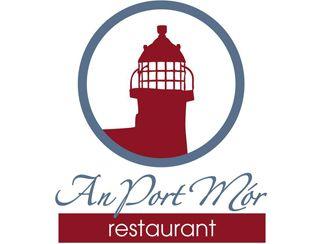 An Port Mór Restaurant is situated in the heart of Westport, Ireland. Our philosophy is to use local, seasonal produce from Artisan suppliers. House specialities include pot roasted pigs cheeks with black pudding and apple and vanilla sauce and 21 day dry-aged sirloin with red onion marmalade gravy. However, the main emphasis is on local fresh seafood and shellfish, particularly lobster, crab, scallops and langoustines from Clew bay.

Author's Review
Ireland has become a nation of foodies, and they certainly know what they want when it comes to the food that they eat. They have also become a nation of people that like too know exactly where their food comes from. We carefully choose the type of restaurants that we feature in our books and the criteria that helps us chose the restaurants is quite rigorous. We look for value for money, visitor experience and a multitude of other t.i.c's (taken into considerations) one of those taken into considerations is 'uniqueness' because of course we don't charge for being featured within our books, every care has been taken in choosing the small handful of restaurants that go into every county. This is where An Port Mor comes into the mix, excuse the pun! An Port Mor has been open now for around five years which is nothing really in restaurant years and have now become one of the finest restaurants within this great countries shores.
On the night I and my designer went to do the review, we called them very last minute to book the table, and without any hassle a table was reserved for us despite how busy they are, which really impressed us. A table was booked for 8.30pm and we promptly arrived at that time which would normally be the restaurants second sitting. This is mainly due to the very popular early bird menu that is only on offer between 6.00pm & 6.46pm sharp. I say sharp, as with this being one of the most popular restaurants in Co. Mayo coupled with how great value the early bird is, tables do get booked up between these times.
I myself started my meal with a seafood platter consisting of Sea trout Gravlax, Poached Smoked Cod and Oyster Platter, whereas Gordon my designer had the Peat Smoked Salmon, which we both agreed were absolutely out of this world. We then followed our starters with Gordon and I both having a Roast Marinated Rump of Walsh's Mayo Lamb, which was truly out of this world! Words Although very strange, we were both too stuffed and couldn't really manage a pudding, however we did finish off with Gordon finishing off a couple of Lemoncellos, and I a coffee, and a fine plate of petit fours. All in all I would recommend An Port Mor too anyone, and with excellent value for money I can sleep better at night knowing that we have probably selected one of Ireland's best restaurants.