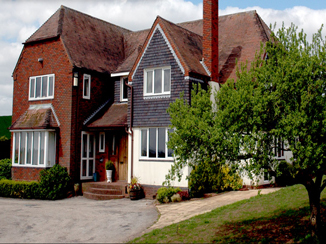 Ashborough's Farmhouse is approximately 400 yards from Old Burcot Lane and is set in the middle of a 100 acre farm. Surrounding the house are fields of wheat or barley depending on the season and sometimes other crops such as oil seed rape and linseed.

Ashborough's Farmhouse is of ancient origin and is mentioned in the doomsday book, although at that time it was called Ashburg and was one of the tithes of the manor of Bromsgrove. Immediately in front of the house are 3 lakes which were originally fish pools maintained by the monks at Stoke Abbey just south of Bromsgrove. In the 1940s the lakes were dammed and deepened to serve as irrigation reservoirs for the farm. The farm still continues as a working arable farm and machinery may be seen on occasions cultivating and treating the crops. In August or September a huge combine can be seen on the farm cutting the crops.

Ashborough's Farmhouse as it is was built on the present site in 1950 and replaced an earlier house immediately adjacent. The house was modernised and extended in 1982 and has been further modernised and extended in 2012. It now provides en suite accommodation to the highest standard and set in tranquil surroundings. The nearest house to Ashborough's Farmhouse is half a mile away and so it is truly individual.

There is an indoor swimming pool attached to the house which guests are welcome to use. It has its own changing room and shower and is a good size being 11M (35ft) x 5M (16ft).

Breakfasts are taken in either the magnificent new farmhouse kitchen or the adjoining dining room.

There are 4 en suite bedrooms available to let in the house (out of a total of 6) although only 3 are let at any one time as this gives guests flexibility.

All bedrooms have tea and coffee making facilities and are en suite with new bathrooms which contain a power shower, bath, toilet, basin and bidet. The shower is over the bath and a grab rail is provided to assist getting in and out.

One bedroom (Wheat) has a king size bed and the others have twin beds which can be converted into super king beds.

All of the beds have high quality Sealy or Vispring mattresses which guarantee a good night's sleep. Additionally there are TVs, hair dryers, full length mirrors and a desk. The desk has plugs for computers and wifi is provided free of charge. The rooms are described below:-