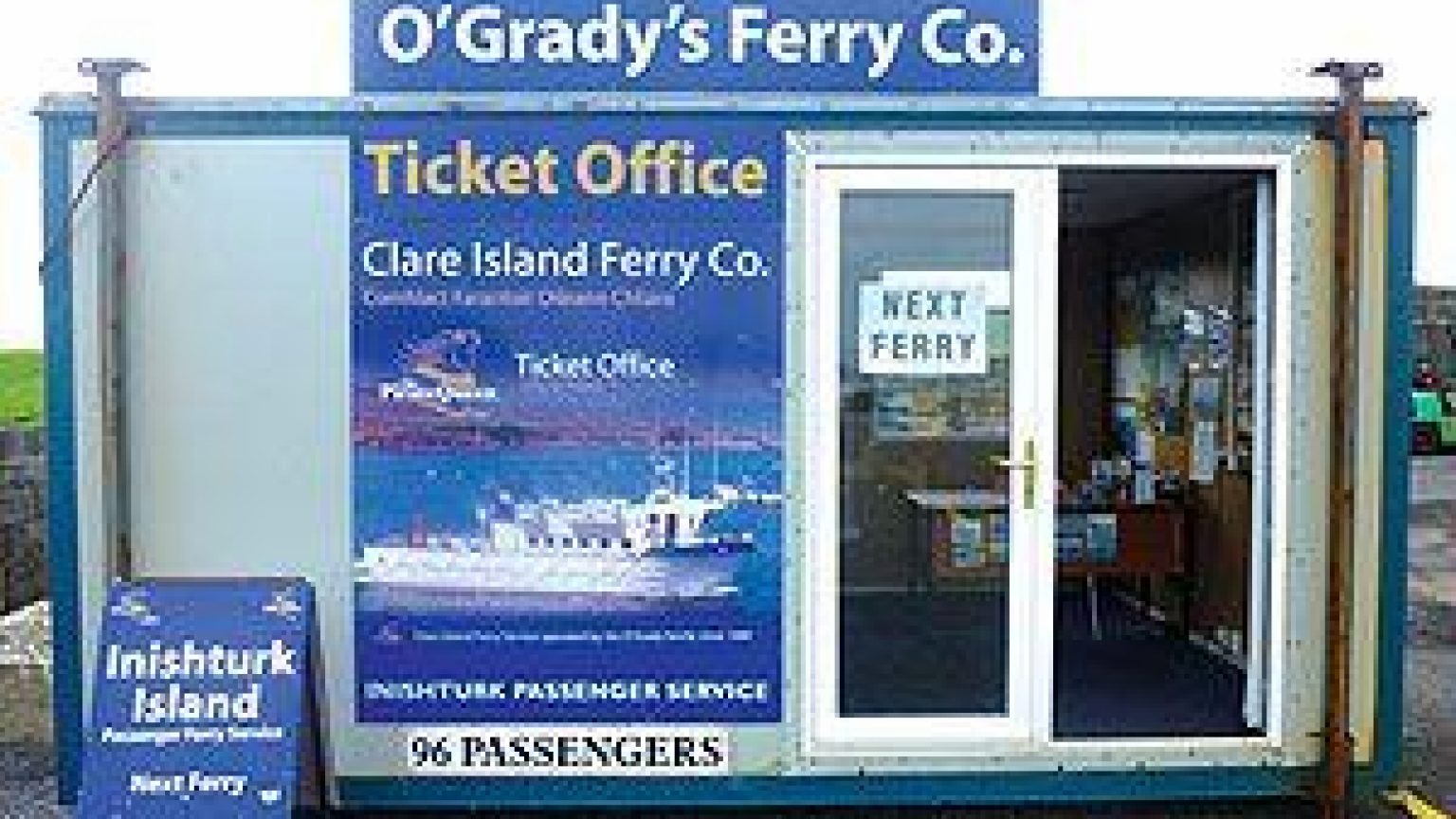 Their ferry, the “Pirate Queen”, is named after the infamous 16th century pirate queen, Grace O' Malley (Granuaile). She lived in a castle by the harbour on Clare Island during the course of her life as a “ chief commander and director of thieves and murderers at sea”. The pirate flag flies from the ferry in her honour.

The “Pirate Queen”, which is the most modern ferry operating to Clare Island and Inisturk, is registered with the Department of the Marine and Failte Ireland and has a certificate for 96 passengers and 4 crew members. Passengers may sit inside the heated lounge area, or sit on the upper sun deck and enjoy the panoramic view of the Clew Bay coastline.

The O'Grady's also operate a smaller ferry boat, the “Very Likely”, which caters for 12 passengers and 2 crew. This boat may be chartered for small groups for sightseeing trips around Clare Island or trips to other islands such as Inishturk or Achill. The Very Likely
The "Clew Bay Queen" is the largest ferry operating to Clare Island and Inisturk. It has a certificate to carry 96 passengers during summer. She also operates a cargo service from Roonagh to Clare Island and Inisturk twice a week, year round.

The cruise from Roonagh Quay (west of Louisburgh) to Clare Island takes just 15 minutes.
The journey gives you enough time to view and photograph a most spectacular coastline which includes Achill Island, the Nephin mountain range, the islands of Clew Bay, Croagh Patrick (Ireland's famous pilgrimage mountain) and Inishturk.

Clare Island Ferries is a similar story to the O'Brien Line in Co. Clare. A family run business that for decades has been ferrying people over to Clare Island. This is a very much needed service not only on a tourism level but on a survival level as Clare Island Ferries are responsible for taking much needed provisions and supplies to the just over hundred residents that live on there. One of Clare Islands residents was the famous Irish pirate Grainne O'Malley and the ruins of her family castle can still be seen there today at the eastern end of the Island. There are so many things to see on the Island from a small Cistercian Abbey to the Clare Island Lighthouse. Although great to visit for the day, I would have to say you really need to stay here for a couple of days to see everything.

Delphi Lodge offers fantastic accommodation in a magical mountain setting. As soon as you walk in, the team welcomes you with open arms.

Nestled in the heart of Connemara, within a few minutes walk of some of the most stunning golden sandy beaches of the country, you can expect a delightful and relaxing stay.

There is life, laughter and lovely fresh food in abundance, at the Award Winning: Nevins Newfield Inn, beautifully situated in one of the most outstanding locations in Ireland, with sensational views of Clew Bay and the Nephin mountain.

Delphi Lodge offers fantastic accommodation in a magical mountain setting. As soon as you walk in, the team welcomes you with open arms.

Mulranny House B&B, is situated in the Award Winning seaside village of Mulranny: a hidden Jewel of outstanding landscapes, on the Wild Atlantic Way, just along the coast of Co. Mayo in Western Island.

If you are looking for an ideal, warm and homely getaway on the magnificent Achill Island off the west coast of Ireland, then look no further than the Hy Breasal Bed &Breakfast.