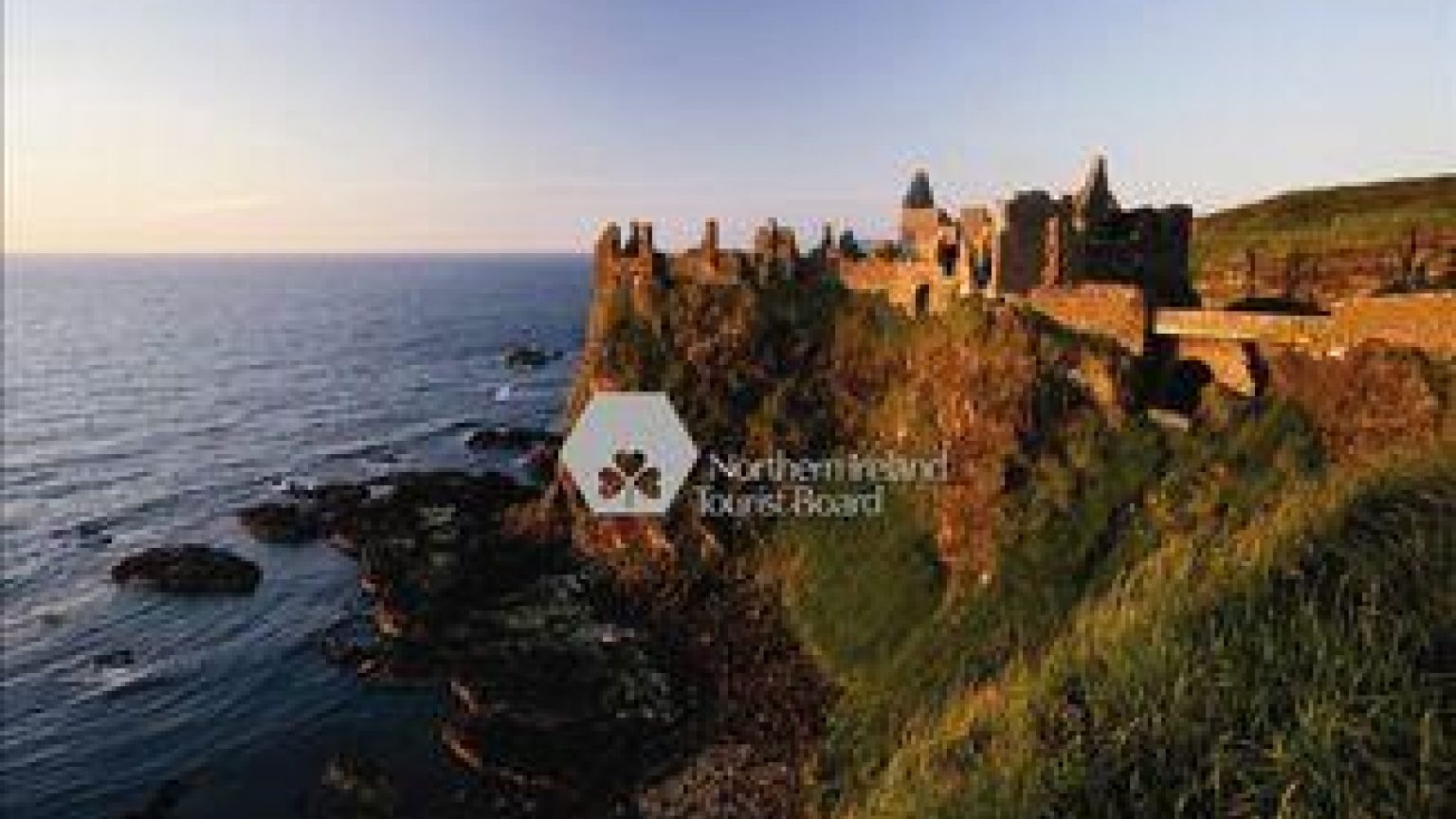 Steeped in centuries of history, myths and legends, the unique and impressive castles and towers that dot the Northern Irish landscape reveal surprising aspects of our past and how, at times, their architecture played a critical role in defining our past and our present.

Dunluce Castle is one of these castles, located dramatically close to a headland that plunges straight into the sea, along the North Antrim coast. It was the headquarters of the MacDonnell Clan. There is archaeological evidence of a village that surrounded the castle which is believed to have been destroyed by fire in 1641. The site was also witness to the sinking of a colony ship that broke up on the rocks off Islay in 1857 with the loss of 240 lives.

Constantly fought over, the castle eventually succumbed to the power of nature, when part of it fell into the sea one stormy night in 1639. It was abandoned shortly afterwards.

While there is evidence that parts of the castle date back to the 14th century, the first record of it is from 1513 when it belonged to the MacQuillans.

The 17th century mainland courtyard, containing domestic buildings, leads downhill to a narrow crossing to the rock, formerly protected by a drawbridge to the gatehouse. The buildings on the rock are 16th and 17th century.

Recent archaeological excavations of Dunluce Castle have further demonstrated the significance of the site, revealing an incredibly well preserved merchant town built in 1608.

Dunluce Castle is regarded as the possible inspiration for Cair Paravel in C.S. Lewis' Chronicles of Narnia.

An app for iphone and android devices has been developed for Dunluce Castle. This is now available, free of charge, from the App Store and Google Play.

There is limited disabled access for wheelchair users as the site has a cobbled, uneven surface. Last admission is 30 minutes before closing. No admission to unaccompanied children under the age of 16.

The Antrim Coastline has been voted by many official bodies as one of the Top 10 Coastal drives in the world. Until you have visited all of the coastal drives in the world it is hard too know, but I will personally say after travelling along this piece of coastline during the preparation and research of this book, this is the best coastal drives that I have ever driven on! Along that journey is the now ruined Dunluce Castle which was first built in the 13th Century. Once home too Chieftains, Earls and their many servants, this castle is just jam packed with Irish history. But since the Battle of the Boyne this once picturesque castle is now in ruins, but still very much worth a visit. No visit too the castle is complete without visiting the wee cottage opposite. Avril, the lady who runs this tearoom is a real character and her sandwiches and cakes are amazing!

Immerse yourself in luxury and enjoy a romantic stay like no other at this stylish boutique hotel. Set in a haven of tranquility, you can expect the highest quality throughout your stay.

Tartine at the Distillers Arms

Fall in love with the Award-Winning, Heavenly food and captivating atmosphere of the Tartine at The Distillers Arms: original home to the Bushmills Distillery owners. Swiss-trained Chef Gary Stewart and team, showcase modern

There is nothing quite like a holiday for making us feel happy, lowering stress and giving us a better outlook on life.

A distinguished family-run hotel, in the most breathtaking of settings. With the Giant’s Causeway, Old Bushmills Distillery & Dunluce Castle,

These pods are surrounded by the natural beauty of the Irish Countryside. The views from here are exquisite, and the peace and quiet is delightful.

This stunning Georgian Barn dates back to the 1700’s. As soon as you enter, the atmosphere is incomparable. So what are you waiting for?