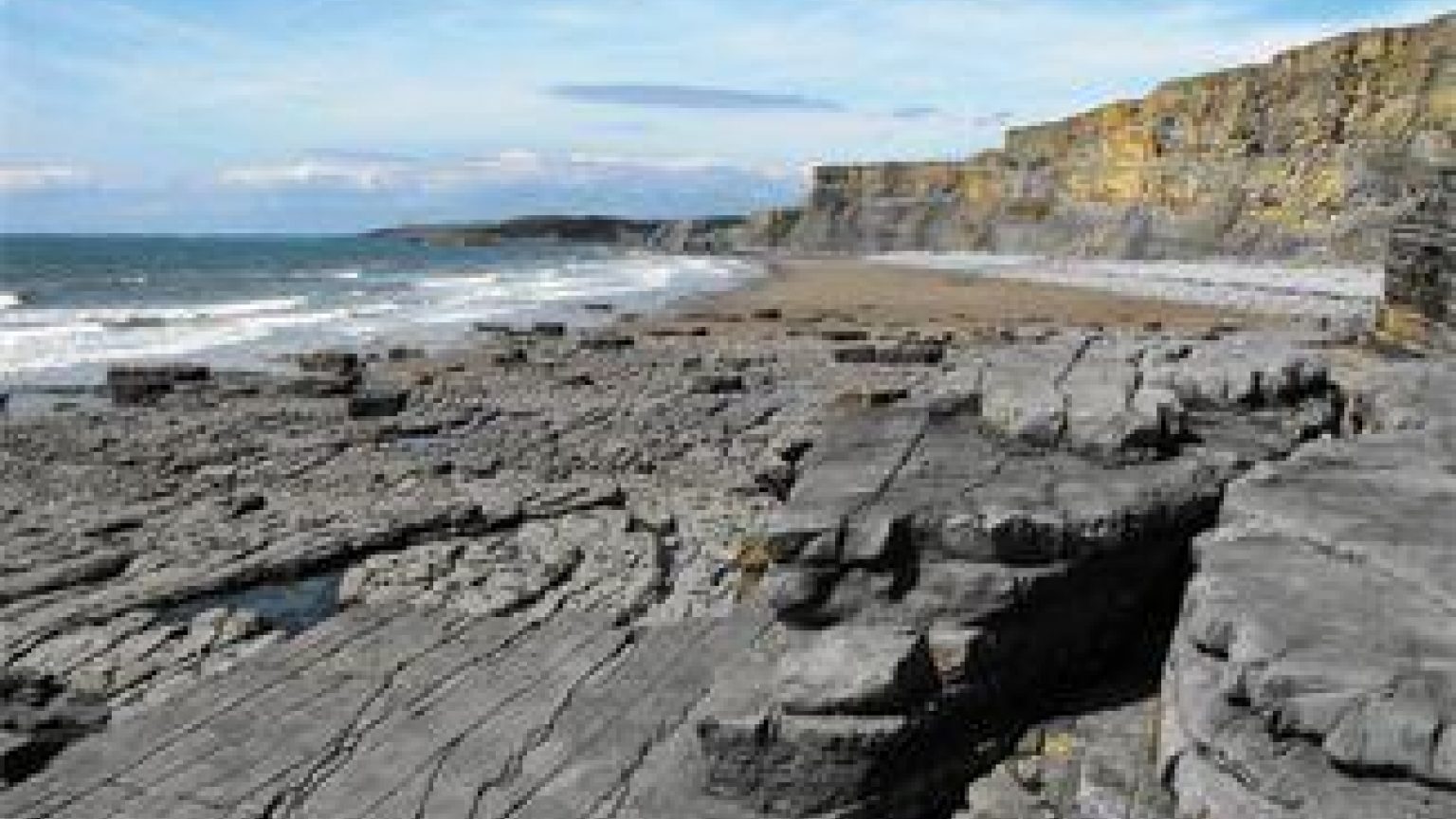 To get to the start aim for Newton which is at the Eastern end of Porthcawl. Park anywhere near the village green, the Ancient Briton Pub or the 12th Century church. With your back to the Ancient Briton pub turn left to head along Church Street which passes the Church of St John the Baptist on the right and the Jolly Sailor pub on the left. Next you pass allotments on the right. As you reach level with the end of the allotments and before Bryneglwys Avenue take the tarmac footpath to the left. Where the track splits go ahead to a waymark sign by a road and metal gate. Cross the road keeping straight ahead and then another road still going ahead. There is a tall overgrown hedge to the left and the path becomes stony. After a while on the open common land you see a path off to the right but keep straight ahead - you are now walking on sand. At a junction of paths take the left path, slightly grassier. (10 mins).

The path goes gently uphill. After a while the path runs alongside a field on your left and enters a coppiced area of trees.

Ignore the path off to the right and pass through two upright metal girders. 50 yards further on fine views open up to the right, whilst our path keeps to the left alongside the hedge. You pass a large house on the left and as you get level with the end of the garden (SS 84985/77549, 1.14 miles, 20 mins) the path turns sharp right and winds its way through the sand

downhill. At a junction of paths turn left following the clear route continuing downhill. Just after you cross over some dark grey stones underfoot you come to an open grassy area. There are two paths off to the left, the second by a wooden post, but take the nearer path to the left, 5 yards this side of the post, winding uphill. Look ahead to note a heavily tree-covered valley which is the direction of our route. Ignore a path going off to the left and paths joining from the right - more coppiced trees on the left. You emerge from the trees and pass through a wooden kissing gate with a waymark post marked Glamorgan Heritage Coast. At the next junction take a right fork bringing you to a second wooden kissing gate. The path curves to the right, the fence on your right. Go through a third wooden kissing gate, the fence now on your left. Fork right as the fence heads off to the left, the path bringing you shortly to a stone wall. Pass through a fourth kissing gate with a large gate to the left, now turning right towards Candleston. (SS 86593/77822, 2.37 miles, 45 mins). After 20 yards take the left fork following the path which curves and then descends, becoming sandy, to a track (SS 87047/77636, 2.68 miles, 54 mins). Go right towards Candleston on the wide and often sandy track. After a while you come to a rough car parking area at which point look to the left and a short ascent brings you to Candleston Castle (SS 87136/77228). Return to the car park which you cross heading for a wide sandy area of dune. Go over a stream at the bottom of the car park and ascend through the middle of the sand, aiming for some short wooden stumps. From the top you can look across to Ogmore opposite. From the top of this sandy area take the right hand path of the two ahead and as the path descends keep to the left-hand side of the clump of trees. From the crest of any high dune you should be able to see the Coastguard centre at Ogmore on the coast. You need to aim to the right of this heading along a bit of a valley with the highest ground on your right. The general direction is South West. If you head towards the South you will come to the Ogmore River - no problem, just turn right and follow the river to the beach. Either way you should eventually come out on to the beach. (SS 85903/76261, 4.25 miles, 1hr 30 mins). Turn right and head along the beach. Just before you get to the houses you cross some large slabs of concrete and just before you get to the huge rectangular boulders head to the right off the beach towards two large green portacabins (SS 83935/77024, 5.74 miles) which are close to an area used for car parking. Go diagonally right across the car park to meet the road and then turn right along the road. After a few minutes walking you will see the Village green where we started. At the beginning of the green on the right is Sandford's Well. (6.18 miles, 2 hrs 10 mins).

Here at the Rock Inn, we pride ourselves on delivering a great customer experience within our fantastic recently refurbished pub.

Salthouse on the Square

All rooms have king size beds which can be adapted to suit families or twin rooms. Recently redecorated, the rooms, all en-suite, ensure comfort as well as

We have a range of fully furnished properties, all of which are equipped with WiFi, on a self-catered basis for anyone looking for short term accommodation.

The Porthcawl Hotel Is situated in the centre of Porthcawl Town. With a Health Club, Streets Nightclub, Sports bar & Diner, Lounge - Kitchen Restaurant the Hotel is the