Attractions, Accommodation, Self Catering in Blessington 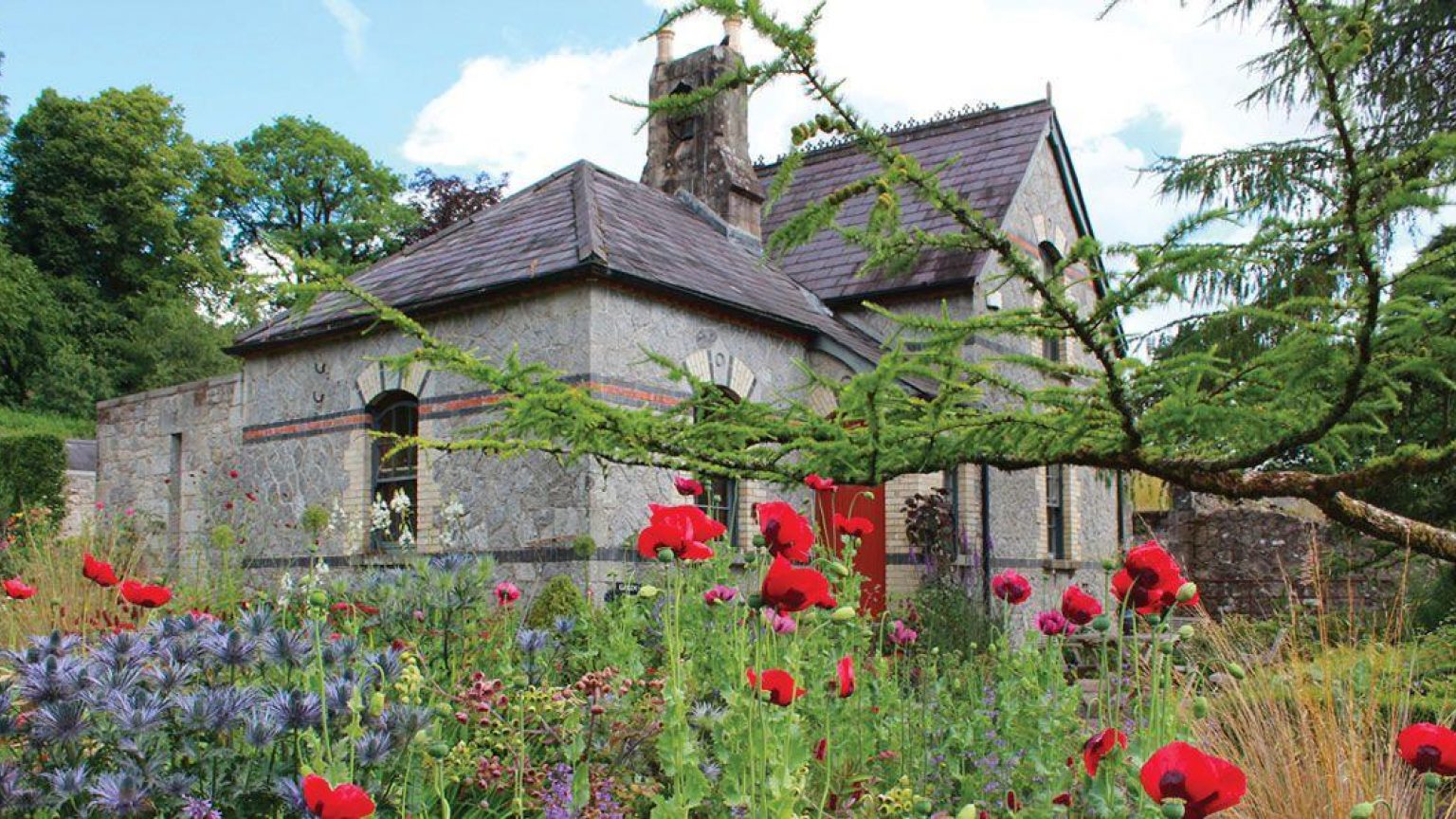 The very best gardens intrigue and restore us, and so it is with June Blake's garden which is a rare fusion of inspired design and painterly planting. Situated in the townland of Tinode in west Wicklow, and spread over three rural acres, it wraps itself around June’s home, a handsome Victorian farm-steward’s cottage surrounded by a huddle of austerely beautiful, granite-stone farm buildings, one of which -the Cow House- has recently been the subject of an award-winning, modern architectural conversion. In a previous life, Blake was a gifted jewellery maker. Those same carefully honed skills- a razor sharp eye and keen attention to detail, an artist’s deep appreciation of colour, texture and form, as well as the ability to take a raw, unpolished material and expertly craft it into something aesthetically deeply satisfying- still shine through brightly in her excitingly contemporary country garden. Within it are many different areas of interest. These include intricately planted borders of gem-like beauty, swathes of naturalistic, prairie-style planting, sculptural landforms, a flower meadow that comes to life in spring with sprinkles of crimson red Tulip ‘Red Shine’, generous stretches of woodland intersected by curving cobble paths and filled with choice shade-lovers, and a formal, rectangular pool whose silver sliver of water is a mirror to the cloud-streaked Wicklow sky. Each one is so thoughtfully, imaginatively and expertly executed that it would be enough by itself to bring joy to the heart of any gardener. But it is when they are combined together as a whole that they form what is, without doubt, a truly remarkable garden.

The Cowhouse is a recently restored farm building set in the grounds of the garden and is available to rent as a 2 bedroom holiday house.

WINNER of 'BEST HOUSE' 2014 at the Architecture Ireland Awards- RIAI

A crisp and effective two story insert within the existing walls of a ruined 19th century farm building the project provides open and uncluttered domestic spaces of great charm. The free standing timber post and beam structural system provides a robust framework which allows for rich and innovative thinking throughout the planning organisation and the project’s sophisticated detail design development. Noteworthy are its beautiful roof lanterns and the clever use of interstitial space between old and new.

The Turkey House is a recently restored farm building set in the grounds of the garden and is available to rent as a 2 bedroom holiday house.

Several years ago four projects were imagined within Tinode House's virtually derelict nineteenth century farmyard buildings.
The first to be constructed was The Cow House which was selected as the RIAI Best House in its' 2014 Awards.
The second was completed in 2016 and is called The Turkey House as turkeys were raised in what had formerly been the stables.

The double height entrance hall has a dramatic cast concrete stairs which leads to the living accommodation on the first floor.
The main shower room which is extensively lined with white glass and floored with black stone mosaic is located here.

Elsewhere floors are polished cast concrete made with local granite sand and aggregate and white cement.
Openings formed in original granite walls to facilitate the new layout are trimmed with blue brickwork.

The former stables at ground level have been subdivided by a new 'spine wall'-a curving partition made of Douglas Fir and plywood.
The larger bedroom has an en-suite shower room which is extensively lined with white glass and floored with black stone mosaic.
It is furnished with a double bed, a recessed storage closet and a free standing bath.
The smaller bedroom is furnished with a double and a single bed.

The living accommodation is located at first floor level is one large open space that accommodates the kitchen, dining and sitting room functions.
A new blue brick wall element has been inserted which functions as a space divider, a back panel for the wood burning stove and a structural element.
It supports the laminated timber ridge beam which spans the length of the space. One stainless steel framed and double glazed lantern and two roof lights light the space.
The circular gable window had been extensively altered to form a direct access from the outside.
It has been substantially reformed but now as a 'key hole' window. Blue brickwork clarifies the latest alteration of original granite walling.

The floor is made of Douglas Fir.
The existing granite walls on the north and east sides were lined internally at both levels with 144mm wide stacked Douglas Fir sections, with 40mm insulation and a 30mm cavity.
The remaining granite walls have been grit blasted and left essentially as found.

I’ve visited June’s garden twice now and each brought as much joy as the other. Plants of all kinds interwoven amongst each other to deliver what I can only describe as a 3D plant encyclopaedia. This garden has been June’s life for many years and it truly is a testament to her vast knowledge of the plant world. The garden itself is a family affair, her son, a distinguished photographer also lives on site and helps manage the place and boy does this garden need managing, as not only can you visit the garden, June’s flair for architecture has shone through with her two purpose built self catering homes which are absolutely remarkable and a perfect base for all those exploring Co. Wicklow. Just when you think that’s it and probably by the time you read this review, the new purpose built tea room will be open and I’m sure be very busy, as a stop to June Blake’s garden is not only a popular one, but one that will leave a very long lasting impression.

This award winning gastropub is located in Kill,Co Kildare. They offer a superb culinary experience and great quality dishes at wonderfully affordable prices.

The friendly team of the Ballymore Inn is so welcoming. For a memorable fine dining experience, indulge in some of their incredible food options and sit back with a glass of your favourite drink. *

Joels is the ultimate family restaurant. Conveniently located on the Naas road with plenty of free parking. You'll love it here because the kid's love here, we have colouring pencils and puzzles and