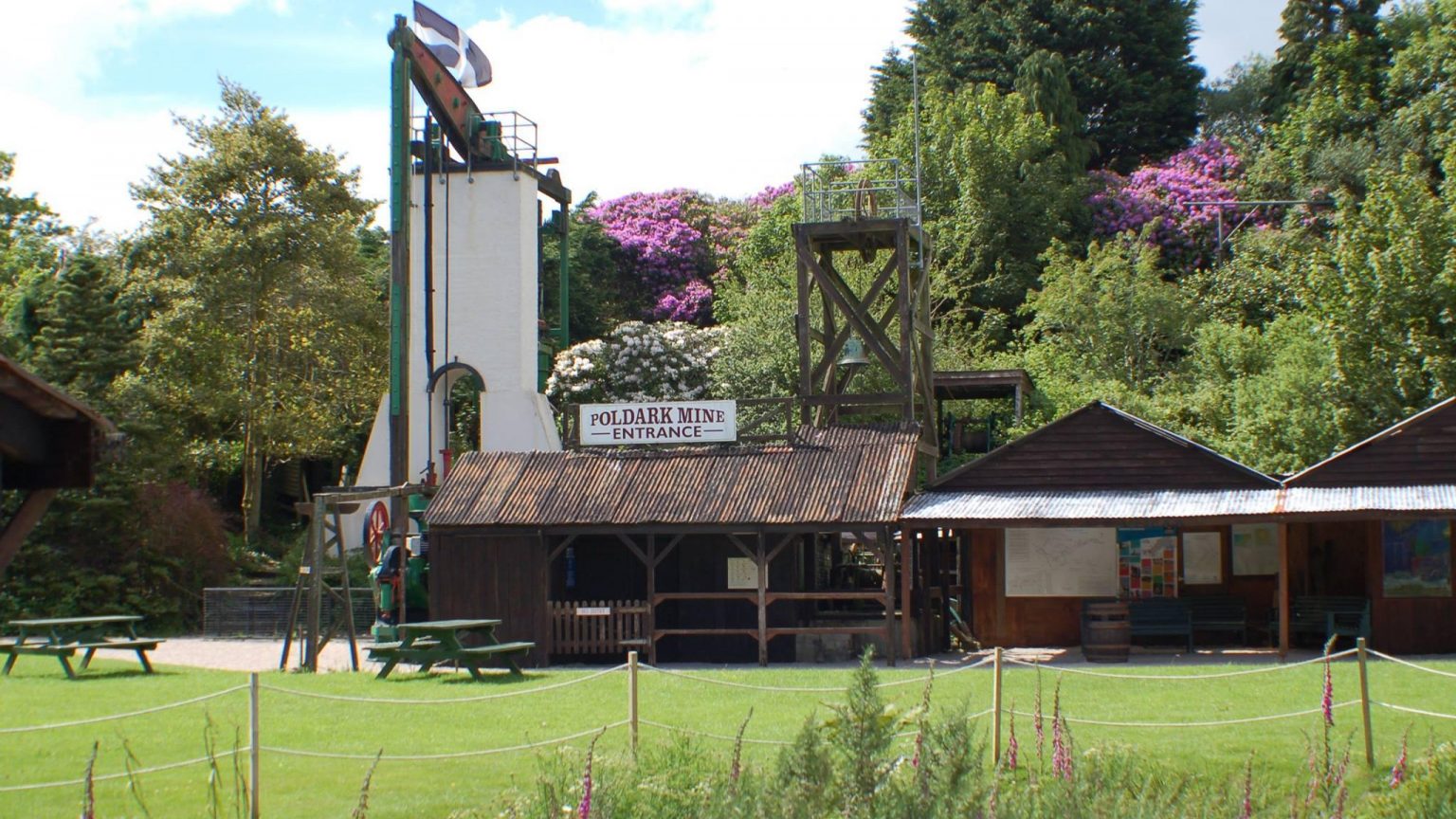 Poldark Mine is the only complete tin mine in Cornwall open for underground guided tours and is generally regarded as one of the most historic locations in the annals of Cornish Mining History. The mine is on several levels and the guided tours by experienced Cornishmen receive many accolades for their unvarnished presentation and the real atmosphere in the mine itself. The mine tour encompasses the 18th century workings of the 1700s, but can boast far earlier pre-Roman origins in areas of the mine that are inaccessible to visitors.

Poldark Mine at Wendron is centrally located near Helston on the edge of the beautiful Lizard Peninsula. The mine is set in over four acres of wooded waterside grounds and gardens in a beautiful glen on the River Cober valley. The tiny Poldark Demesne is in a rural area of Cornwall just 6 miles from the sea. Following closure and bankruptcy in 2013, the well-known mine re-opened in June 2014 under new ownership and heritage management.

As part of the UNESCO Cornish Mining World Heritage Inscriptiion (Wheal or Huel Roots) has a special place in the story of tin mining. Its an ancient location that is the veritable cradle of tinning in Cornwall. There is a unique 4000 year old Bronze-Age Scheduled Ancient Monument in the riverside grounds where alluvial tin ore was processed by ancient Britons. The Trenear Mortar Outcrop is formed from a living granite outcrop some 290 million years old. The granite here is the oldest in Cornwall being over 20 million years earlier than the remainder and is part of the Carmenellis Pluton. This Monument Stone serves to confirm the great antiquity and national importance of the location. We call this our TIN HENGE.

Visitors have been coming from all over the world to explore the labyrinth of four levels, caverns, adits, stopes, passageways and shafts that make up this 18th century mine since it was first opened to the public in 1976. Its been seen by millions all over the world due to the BBC Poldark Drama that was filmed here in the 1970s and in the current BBC series of Poldark. Other BBC productions have also been filmed here, such as Penmarric, BBC Childrens programmes, BBC TVs FLOG IT, and sequences in a number of documentaries.

It’s no great secret that Cornwall is just as famous for its mining than it is for its Cornish Pasties, in fact it was down in the mines that this great delicacy was invented. But I’m not here to talk about food, I’m here to explain to you just exactly why I chose Poldark Mine as one of my Top 100 Attractions. It is true to say that a few years ago I wouldn’t have even taken a second look at this mine as it was run down and in a sad state of repair as are a lot of old mines in this country. But now this great bastion of Cornish history is back open once again and offers a great visitor experience. This is partly due to the new management, David Edwards coupled with his considerable experience in the Heritage world, along with his great team of staff and volunteers really do deliver an amazing and informative experience.

Come and sample the delights of our new head chef. Bringing her own innovative, contemporary and traditional menus. Susan has come down from the north west

Ideally located in the picturesque town of Lostwithiel, dine in the heart of a historical destination. With many dishes to satisfy your tastebuds, fall under the spell of their modern and stylish British cuisine. *

As well as the Jail Museum attraction, we also have superb restaurant and bar facilities, accompanied by our very comfortable Witness Box wine bar, where morning or afternoon tea

Expect supreme comfort and an unforgettable experience in the unique location of the lizard peninsula in Cornwall. Located a stone throw away from some

Be at one with nature in this mystical land of wilderness and have your days and nights fill themselves of pure joy and peace.

Welcome to an elegant and eco-friendly glamping site. The gorgeous pods are fascinating, powered by solar panels, they also have a brilliant under-floor heating system.