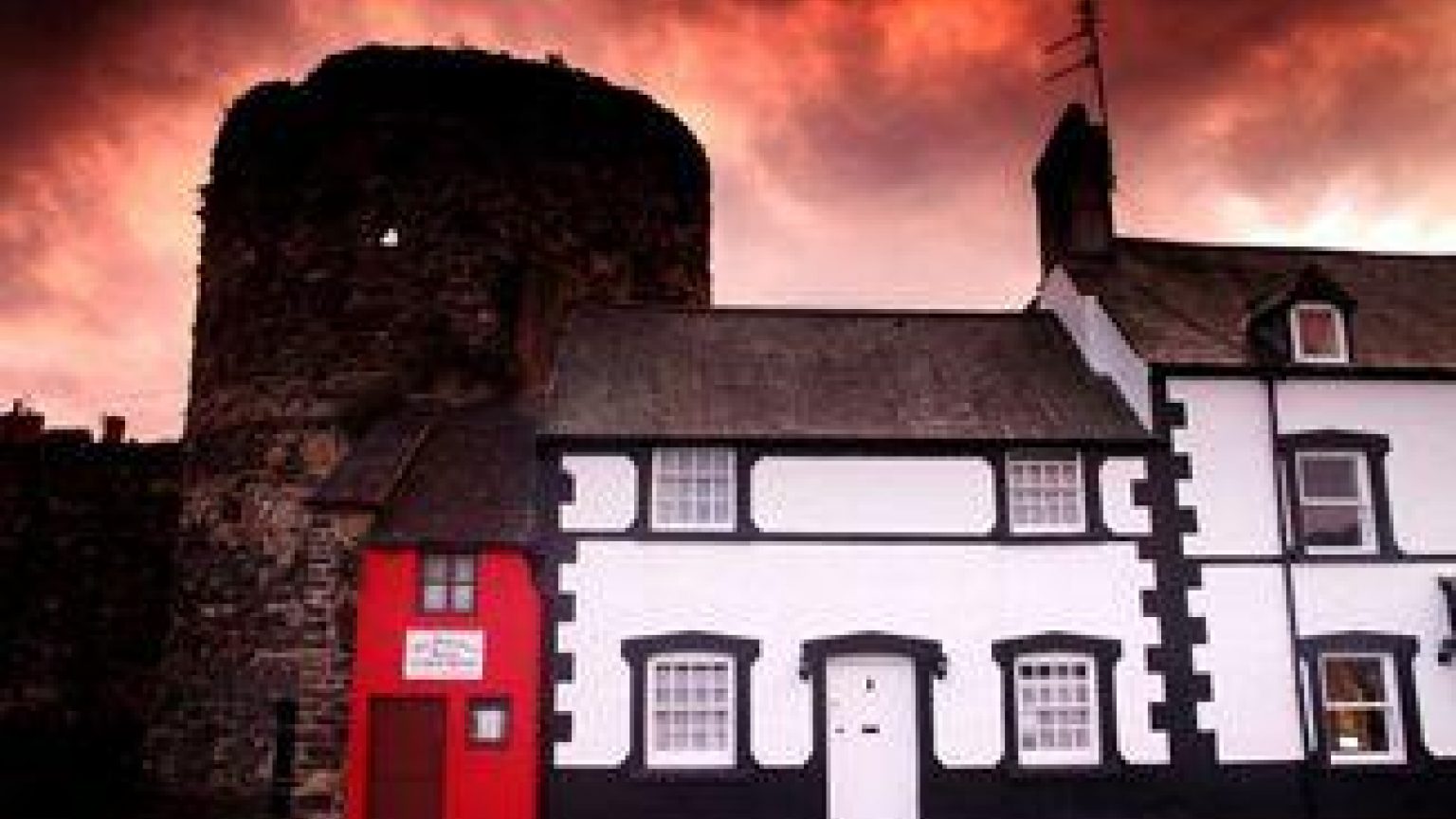 The Smallest House in Great Britain is a tourist attraction on the quay in Conwy, North Wales. The 3.05 metre by 1.8 metre (10 feet by 6 feet) structure was used as a residence from the 16th century until May 1900. As its name indicates, it is Britain’s smallest house, as mentioned in the Guinness Book of Records. The last tenant was a 6ft 3 inch (1.9 metre) fisherman called Robert Jones. The rooms were too small for him to stand up in fully and he was eventually forced to move out when the council declared the house unfit for human habitation. At the time the house was condemned, it was owned by a prominent local land owner, confusingly also called Robert Jones and the house is still owned by his descendants. The house is currently red and it is built up against the Town Walls. People can enter for £1.00 (50p for children). Recorded information about the house plays inside and a Welsh lady stands outside when the house is open. The upstairs is so minute that there is room only for a small bed and a bedside cabinet. Visitors can’t walk about on the 2nd floor, but can view it from the access ladder. Downstairs there is just about enough room for a stove, a water tap, and a settle to sit on.

I met with Margaret Williams the then owner of the smallest house in Conwy for a coffee and a chat about the life and times of this house, past owners, her family and her passion for this cute little house on the quay in the charming walled town of Conwy. First however, I had the fortunate chance to have a good look round this ancientWith the last inhabitant living there in 1900 it is quite easy to see that even though this house is so small, for the time period that people would of lived there, the house itself would of been a very cosy place to live. With poverty all around them, whoever would of lived here and there were many, they would of considered themselves very well off indeed! No trip to North Wales is complete without a trip to the smallest house in Great Britain, and that's a fact!

L's Coffee & Bookshop is a great little shop with lot's of character.With nearby parking in the castle hotel, together with great food and a warm welcome, you will not be

Our Head Chef, Andrew Nelson is ably supported by his team of young aspiring Welsh chefs being mentored in all that's good about Welsh food. Consultant

Johnny Dough’s at The Bridge

What started out as a seedling of an idea in the mind of a young man, has flourished and sprung into an ever expanding olive tree of success for Johnny Dough's Wood Fired Pizza

Set in a 300 year old coaching inn, Castle Hotel is a mile from Conwy Marina. Offering free parking and free WiFi, the hotel has elegant bedrooms and a traditional restaurant.

Johnny Dough’s at The Bridge

What started out as a seedling of an idea in the mind of a young man, has flourished and sprung into an ever expanding olive tree of success for Johnny Dough's Wood Fired Pizza

Gwynfryn B&B and Refrectory is situated in a converted 19th Century Welsh Methodist Chapel located within the cobbled streets of the historical walled town of Conwy,