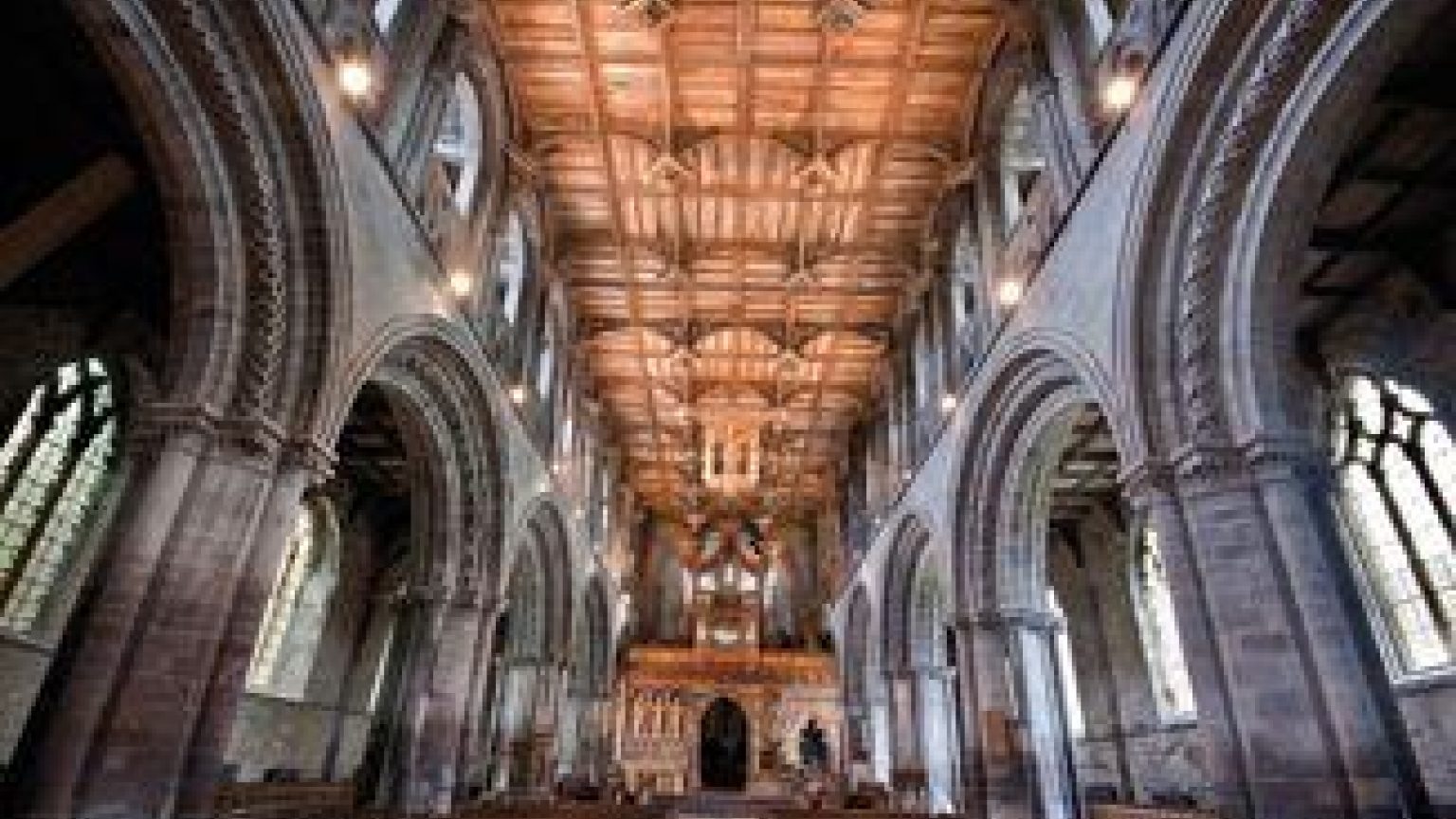 St Davids is one of the great historic shrines of Christendom. Nowhere in Britain is there a more ancient cathedral settlement, for it reaches back fourteen centuries and survived the plunder of the Norsmen in the 'Dark Ages'.

St David chose this wild, beautiful region as the site of his monastery in the 6th century and you will find his shrine in the purple-stoned cathedral, which nestles inconspicuously in a grassy hollow beneath the rooftops of the tiny city.

The 15-foot high Close Wall, built in the 14th century enclosed the original cathedral city. The wall was pierced by four gatehouses. The Tower Gatehouse, is the only survivor and was used by the medieval town council. Also housed in the Tower Gate House is the lapidarium (where there is a display of religious stones) and below is the bishop's dungeon. Next to the gatehouse stands the 13th century Bell Tower which now has a Royal ring of ten bells.

The Gatehouse contains an exhibition designed to introduce the pilgrim/visitor to the history and life of the Cathedral today including its daily worship.There is information about St David himself, about mediaeval pilgrimage to St Davids (two trips to St Davids was equal to one to Rome itself), and the importance of St Davids. In mediaeval times St Davids occupied a strategic position at the junction of major land and sea routes between England, Wales and Ireland and therefore the monarch took an interest in St Davids, William the Conqueror visiting in 1081.

The exhibition then considers Reformation and Revolution and the impact of these on the Cathedral when in the Civil War, Commonwealth troops did severe damage to the cathedral and destroyed manuscripts in the library.

The last phase covering the last two centuries has been a time of renewal and rebuilding culminating in the restoration of the gatehouse and the recreation of the mediaeval cloisters.

Also housed in the Gatehouse is a Mediaeval Bell and the Abraham Stone, which is the gravestone of Hedd and Isaac, sons of Bishop Abraham, killed by the Vikings in 1080. The decoration reveals a blend of insular Celtic and intrusive styles. Amongst other items on display is the carving from above the door of the West Front designed by Nash.

The Cathedral Treasury provides a safe home for treasures which tell the story of Christian worship and scholarship at St Davids that began 1,500 years ago and which continues to the present day.

The Library has collections belonging to Deans, Bishops and Clergy dating back to the 16th century.Books and other material are constantly being added and the subject matter is St. David, St Davids, Wales, and Church in Wales history. The library also holds a collection of local and cathedral photographs dating back to the 19th century and the Parish Registers.

The United Kingdom has more Cathedrals than many other of its European neighbours, and in Wales there is one that is that special, we just had to feature it as one of our Top 100 Attractions in Wales. St David's Cathedral based in one of Wales smallest cities, has attracted millions of pilgrims from all around the world, all I'm sure have left with similar feelings as I felt. Hope, positiveness, and a sense of joy that cannot be explained, are amongst some of the feelings that a visit to St David's Cathedral ensues. Also on the same site as St David's Cathedral is the Bishops Palace, which is ran by CADW, the heritage department of the Welsh Government, and does carry a small admission fee. Although entry into the cathedral is free, donations to the cathedral via their donation box is gratefully received and very necessary to St David's Cathedrals future.

The Old Cross Hotel is situated right in the centre of the tiny City of St Davids, on the Cross Square. The facilities include en-suite accommodation, on-site parking, free wifi, and a fully

St. David’s Gin & Kitchen has been created purely from a deep passion for the St. Davids Peninsula, community, environment and locally grown food. The highly attractive peninsula has been a cultural hotspot for thousands

Good advice indeed, and after a little retail therapy in the UK’s smallest city; St. David’s in Haverfordwest, nothing beats a sizzling slice of sensational pizza, and a cold glass of Award-Winning Pembrokeshire craft beer

With spectacular views of one of the great historic shrines of Christendom: St. David’s Cathedral; this wild, breathtaking region is home to the family-owned Cathedral Villas. With options for Dinner, Bed & Breakfast, as well as full board,

The Old Cross Hotel is situated right in the centre of the tiny City of St Davids, on the Cross Square. The facilities include en-suite accommodation, on-site parking, free wifi, and a fully

At Top 100 Attractions, we understand that when it comes to choosing a luxury holiday cottage, in which to spend your much-needed time away, expectations are high. St. David’s Country Cottages offers an idyllic,