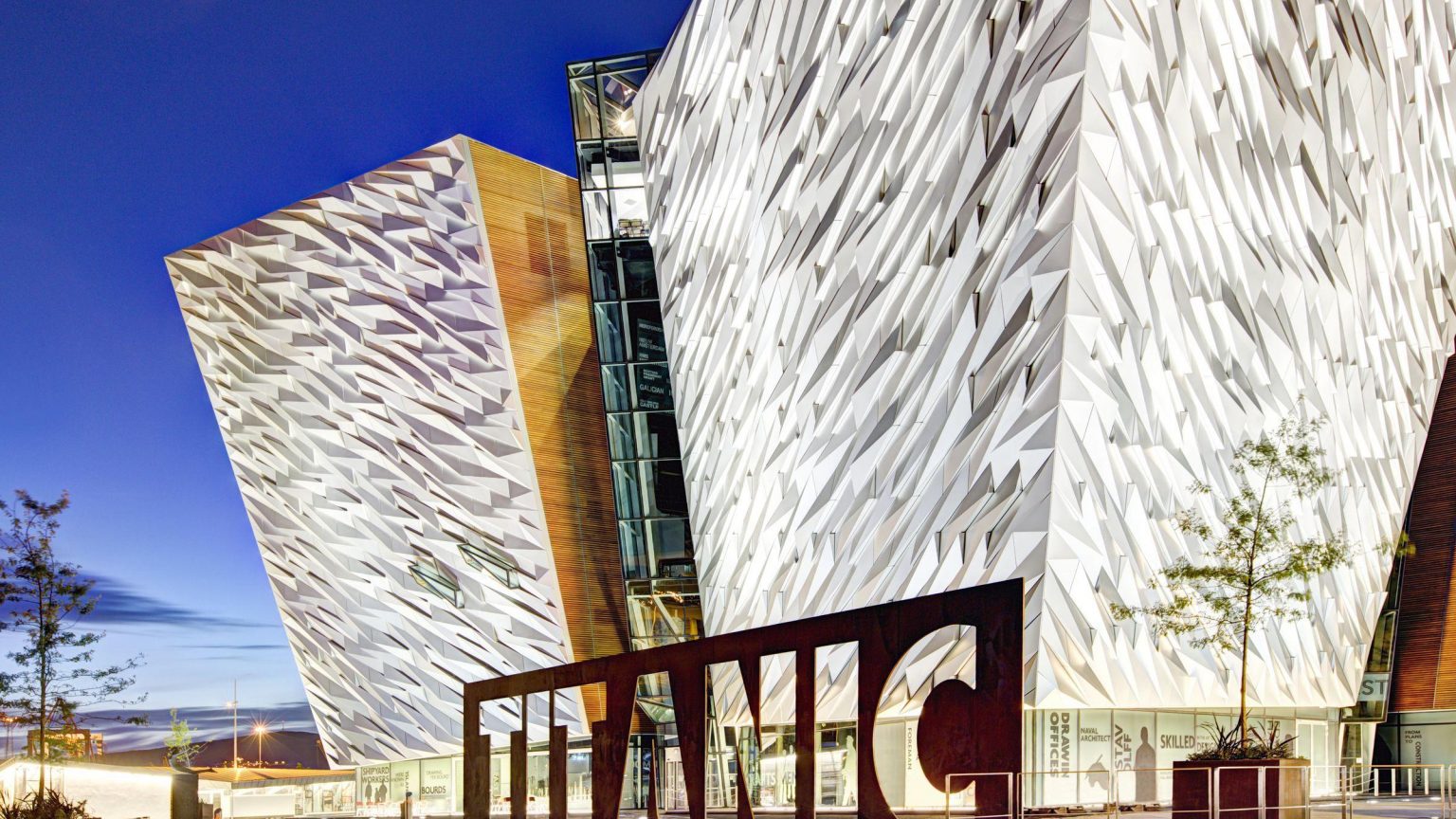 Titanic Belfast® extends over nine galleries, with multiple dimensions to the exhibition, drawing together special effects, dark rides, full-scale reconstructions and innovative interactive features to explore the Titanic story in a fresh and insightful way from her conception in Belfast in the early 1900s, through her construction and launch, to her infamous maiden voyage and catastrophic demise. The journey goes beyond the aftermath of the sinking, to the discovery of the wreck and continues into the present day with a live undersea exploration centre.

Titanic Belfast stands at the head of the historic slipways where Titanic and Olympic were built and from where these famous ships were first launched into the water.

Walk down the very slipway where Titanic was constructed and explore a life size plan ofTitanic's Promenade Deck which is inlaid in white stone.

Discover the positions of the liner's lifeboats and funnels and have a seat at one of the benches positioned exactly as they would have been on board the deck of Titanic.

Visit the Titanic Memorial Garden on the Olympic slipway where four grass lawns alternate with timber decking to illustrate the proportion of Titanic's victims and survivors from each of the passenger classes and crew.

The names of the dead are permanently set in vertical glass panels on the slipways.

The lamp posts represent the stanchions of Arrol Gantry, one of the world's largest cranes. Embedded into the slipways are two life-size outlines of Titanic and Olympic's main deck illuminated by blue light, echoing the scale of the Great Gantry and the Olympic-class sisters.

From above, Titanic Belfast is a star shaped building, representing the logo of White Star Line.

I am writing this review on the 2nd of April 2014, but the 2nd of April isn't just any day in the calendar, it is the very day that the Titanic set sail on her trial voyage, and also her journey toSouthampton, England.Nobody at that point would of envisaged the Titanic's future and how engrained this ship would be not only in our future, but the future of cruise liners today. I specifically waited for this day to write my review, because I wanted a certain element of authenticity behind every word, this leads me nicely to the Titanic Museum in Belfast. I was hugely impressed with this museum and I think it was a long time coming. I have visited three times now and on every occasion I have seen something new that I must of missed before, that's how much there is too see and do here, worth every penny!

An ideal base when visiting Belfast, this outstanding hotel blends luxury and originality in the most fascinating of ways.

This popular seafood restaurant offers guests an abundance of the freshest, most succulent seafood that has been praised highly by critics at the Observer

An ideal base when visiting Belfast, this outstanding hotel blends luxury and originality in the most fascinating of ways.

Based in the heart of buzzing Belfast, this Victorian house oozes with charm. The hotel team is super friendly and everyone is ever so welcoming.

House Belfast provides a ‘home from home’ to its guests but with a little sprinkle of something special. Located along Botanic Avenue in the vibrant city of Belfast,