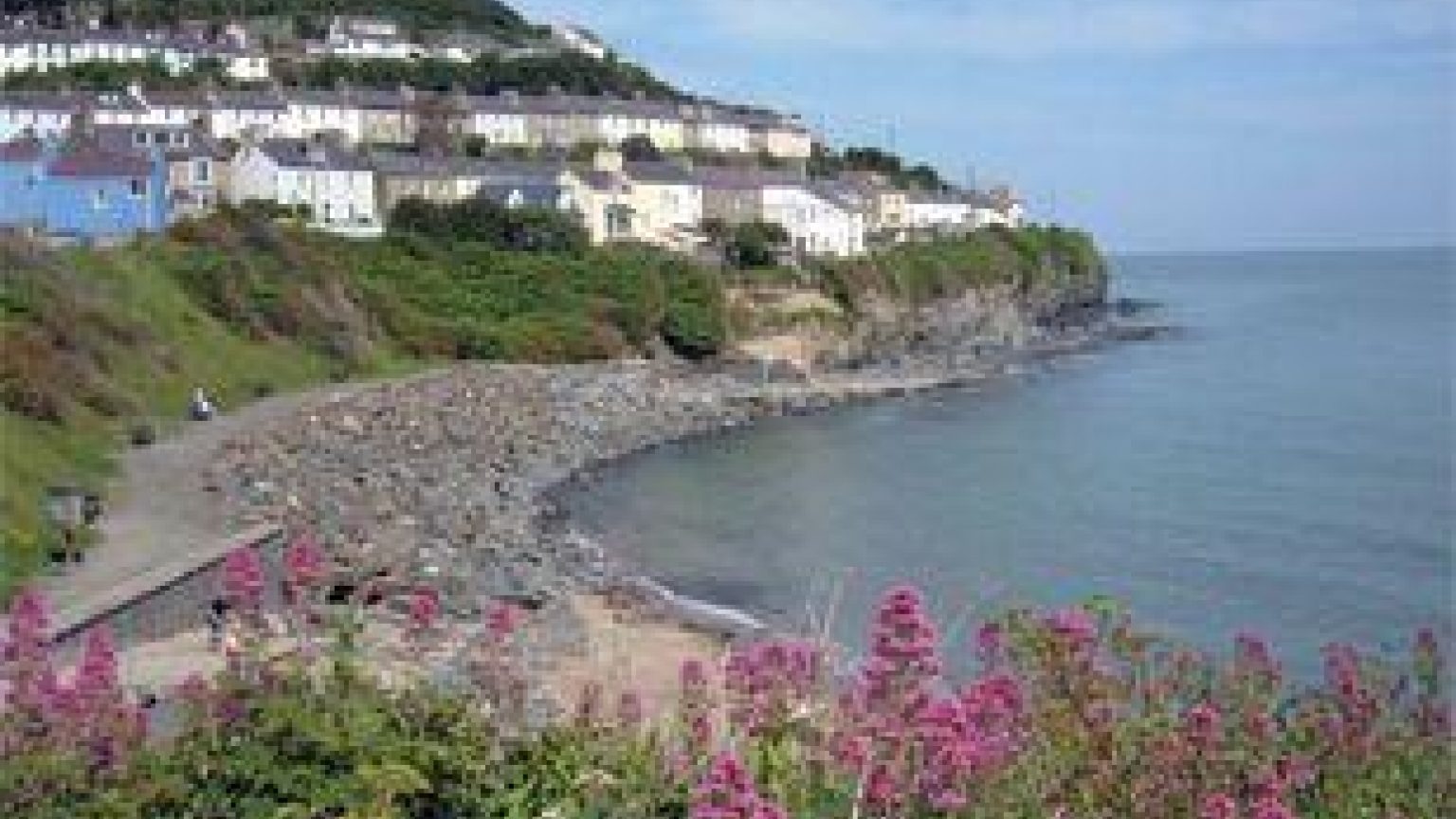 Nestling at the base of the coastal plateau, Llanrhystud extends along the banks of the Afon Wyre about a mile from where the river reaches the sea. Situated on the edge of the fertile coastal plain, the village has long been a focal point of agricultural activity in the area.The extensive beach is composed of boulders and pebbles but during low water wide strips of flat sand become exposed.The now tranquil beach once resounded to the clatter of shipbuilding and, throughout the 19th century, four kilns at Craiglas were once the scene of a thriving lime industry.

The historical importance of Llanrhystud is emphasised by the number of ancient settlements in the vicinity.To the south of the village, two distinctly rounded hills; Castell Bach and the now wooded Castell Mawr were formerly both hill forts.They are separated by a gully traditionally known as the ‘dell of slaughter', referring to an ancient battle, with the field below serving as a burial groundBy the 10th century Llanrhystud had become a religious settlement important enough to warrant the attention of marauding Danes who destroyed the village in 988 AD. The present parish church, dedicated to St Rhystud, a 6th century Celtic missionary, dates from 1854 but is of more ancient foundation.

Following the beach southbound from Llanrhystud takes you to the vicinity of the twin-village of Llansantffraid Llanon. The Llansantffraid section lies on the low coastal apron whereas Llanon's terraced, stone-built houses extend along the old

turnpike road. The mixed Welsh / Irish influence is again witnessed in this area. It is most unusual to have two churches in the same parish, both dedicated to female saints. Here we have one dedicated to a female Welsh saint, the second dedicated to an Irish saint.Tradition has it that St Non gave birth to the patron saint of Wales, St David, at Llanon around 500 AD: this is commemorated by the Non Stone, now in the Ceredigion Museum at Aberystwyth. St Ffraid (St Bridget), the patron saint of dairymaids was the daughter of an Irish chief; she founded the famous monastery at Kildare, where she died in 523 AD. South of Llanon you will encounter ancient strips of land called ‘slangs'.The patchwork quilt effect produced by the division of the ‘slangs' by furrows, stones and hedges is most striking. The southbound path climbs along the cliff top before descending towards historic Llanddewi Aberarth from where you can walk along the foreshore to Aberaeron or use the dedicated roadside path.

Descending towards New Quay, you first encounter the old shipbuilding beach at Cei Bach (the small quay). The earliest recorded sailing vessel built here was the 36-ton sloop ‘Betsy' in 1805. Launching was ceremoniously conducted with all the craftsmen involved and the local population turning up to celebrate. The 291-ton three-mast barque ‘Syren' which foundered en route from South America in 1887 was the largest ship built here. On the southerly extreme of Cei Bach, the headland of Llanina Point once extended further out to sea culminating in Carreg Ina, a large rock where, according to local folklore, a mermaid could be seen basking in the sun. She once became entangled in a fishing boat's nets and, on being released by fishermen, warned of an incoming stor enabling them to return safely to the shore.Ash and sycamore obscurea small stone church dedicated to Ina.The original church was lost to the waves but the existing structure, built in 1850, incorporates masonry from its predecessor. Dylan Thomas lived nearby during World War II.That period was Dylan's most prolific in terms of literary output. You will see from your OS map that you can walk to New Quay along the minor road from Cei Bach - rather than along Traethgwyn.

Harry's Hotel Aberystwyth offers excellent accommodation and is located in the heart of town. As well as Hotel rooms, Harry's offers undoubtedly

The Welsh Black is a 2 star Inn in the pleasant village of Bow Street, which makes it an ideal place to stay if you are exploring the Ceredigion coast or the nearby coastal town of Aberystwyth.

This stunning pet-friendly Mansion Country House hotel is a heavenly location for a romantic getaway but also the most wonderful of venues for a wedding.

Harry's Hotel Aberystwyth offers excellent accommodation and is located in the heart of town. As well as Hotel rooms, Harry's offers undoubtedly

A visit to Aberystwyth is not complete without a stroll along the Heavenly picturesque seafront. Built in 1864, the mile long Victorian promenade possesses the oldest pier in Wales, and standing 430 feet

The stunning sea views from these apartments reflect their name wonderfully. Ideally located in Aberystwyth, on Cardigan Bay,