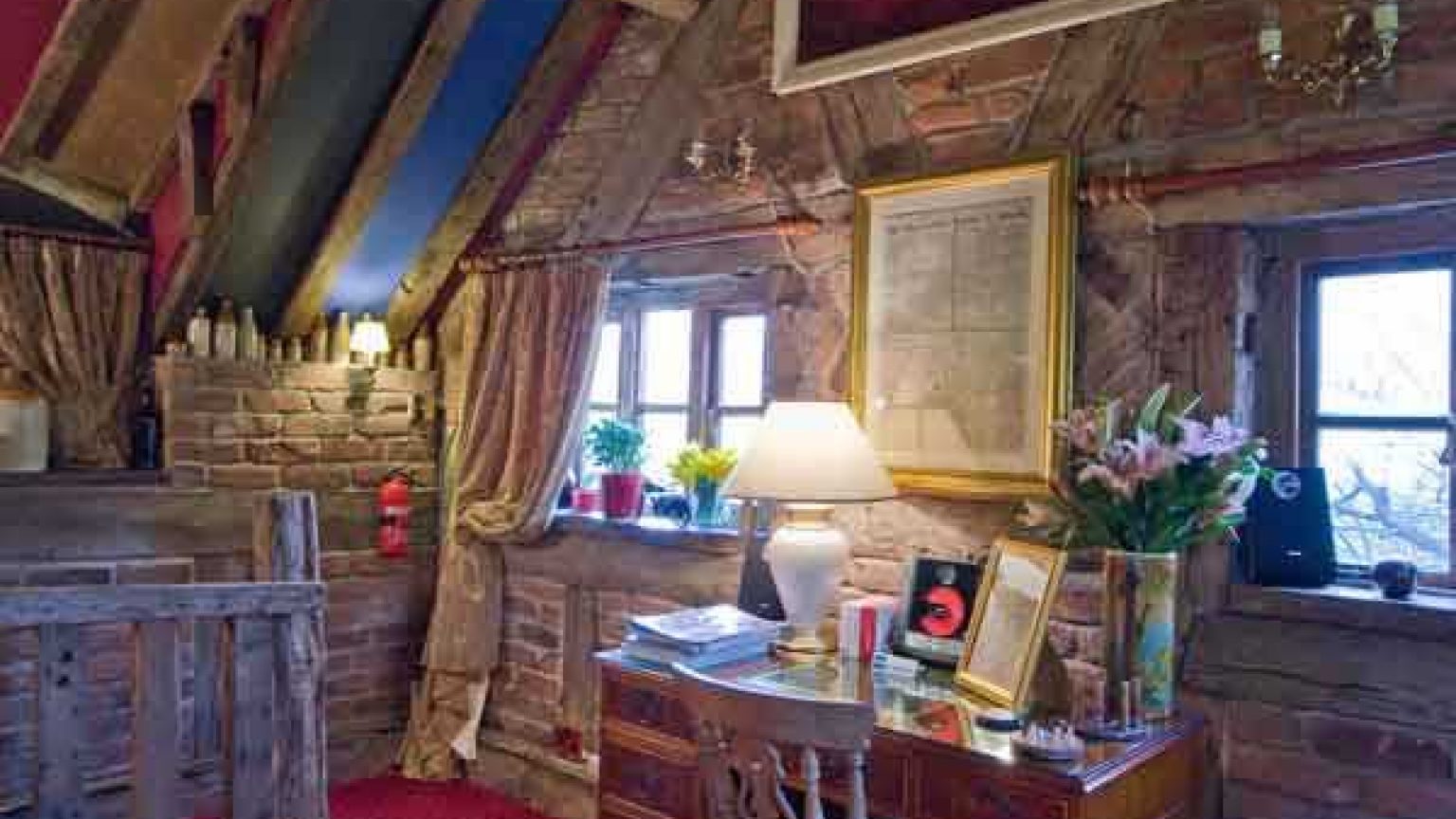 International Rock Stars, famous actors, Premiership footballers, Fleet Street journalists, seasoned travellers from 5 Continents and even a Government Minister have all beaten a path to Wizards Thatch - where its 5 star hospitality has been recognised with the top award by the world famous travel site, Tripadvisor.

Tripadvisor's Certificate of Excellence has been awarded year after year with consistent superb guest reviews which have also resulted in Wizards Thatch being installed into its Hall of Fame.

Today the village boasts some of the finest shops, restaurants and bars in the country and is famous for its celebrity clientele, which includes many premiership footballers (David Beckham being a former resident), actors and top business professionals who enjoy the lifestyle which this small village has to offer. Aderley Edge is now one of the most desirable places to live in the country.Wizards Thatch at Alderley Edge dates back over 400 years and lies at the foot of The Edge, a reputed mystical sandstone outcrop which stands guard over the Cheshire Plain at Alderley Edge. It takes its name from a local legend. On the very road where this encounter is said to have taken place lies the thatched cottage - an old dwelling when this tale was first recorded in 1753.

Tariffs include a business rate and a romantic break rate. Each suite is serviced each day and is sheer luxury. They are filled with sumptuous leather furniture, antique prints and each room has its own indulgent character. They all have LCD TV's, CD Players and radios. Bathrooms are equipped with luxurious toiletries, bathrobes, fluffy towels etc. All have fresh flowers, a full set of crockery, cutlery, a fridge, toaster, microwave and glassware as well as tea and coffee making facilities (teas, including speciality teas, and coffees, milk are provided). Hairdryers, fans, irons and ironing boards are on hand. There is free WiFI and DVD and CD libraries.

The Period lounge with its heavy timbered low beamed ceiling boasts a huge 17th Century fireplace (for decoration only). This enchanting room with opulent red leather upholstery and antique furniture has rich dark Arabian red walls displaying many antique prints, 18th Century original newspapers, old stone flagons and other interesting collectibles.The master bedroom boasts one of the largest beds in the County, a magnificent 7 foot long by 6 foot wide 4 poster bed draped in red and gold tapestries. With over 200 separate parts this 'Kerry' Monster is the creation of a true craftsman.This spacious room also sports many original newspapers as well as numerous-humorous 19th Century Punch Prints and a show case of football memorabilia. A complimentary bottle of champagne on arrival awaits guests who book the romantic tariff.

The Merlin suite offers luxurious 5 star self contained accommodation. It is filled with sumptuous leather furniture, antique prints, and each room has its own indulgent character.The Lounge has half timbered walls which are decorated in golds, reds, blues, browns and creams!!! For your enjoyment there is a 32 inch flat screen TV with freeview, DVD ( with good film library ), CD player (with discs) , a DAB radio with iPod docking station and complimentary WiFi iinternet.

The Wizardry is a totally self contained suite with its own entrance and is in the oldest part of the Thatch. You enter through an old thatched porch into the low beamed lounge with its walls painted in Arabian Red.The lounge has sumptuous settees and luxurious sheepskin rugs and its walls are adorned with interesting memorabilia. For your entertainment there is a flat screen TV with DVD player along with a good film library and a CD player with a good selection of CDs.

Cheshire is synonymous with its history and not only its historic buildings, but its gardens of distinction also. But another thing it is starting to be famous for, is the ancient building, known as Wizards Thatch, located in one of the counties most prestigious villages. Hidden unassumingly within this pretty village, Wizards Thatch along with its 400 year history, has played host to a whole multitude of famous and important people over the years, but its owner, Ian Lambert, is very humble to all of that and putting all that aside, his main drive and ambition, is to just provide an amazing experience for all of its visitors, no matter their status in life. As I walked around each of its three suites, Camelot, Merlin and Wizardry, I must of said the word ‘wow’ a hundred or so times, such is the magic of this place, excuse the pun!

Our outpost in the North is The Oakwood pub in Alderley Edge, near Wilmslow, Cheshire. We have lovingly restored and renovated the building to highlight original features,

The Bull’s Head is a shining example of what a quintessentially English pub is all about. Charming features, cosy surroundings and excellent food are

Almost near derelict back in 2013, the ‘Cheshire Cat Pub and Inns’ company came to the Church Inn’s rescue and transformed this once sows ear, into a sparkling silk purse.